Tangs, also known as surgeonfish, are probably the most popular fish in the reefkeeping hobby next to the clownfish. Tangs come in a variety of colorations, from a striking contrast of blue, yellow, and black (as is with the blue hippo tang) to the subtler blend of brown and yellow (as is with the kole tang). 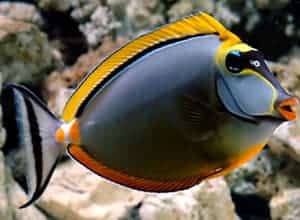 Let’s face it though – most marine fish have beautiful colorations and patterns. What sets this species apart from other fish, however, is that they act almost like dogs; they’re aware of their owner’s presence and might even be able to tell apart their owners from strangers. Apart from their attractive appearance and personality, they’re also voracious algae eaters, continuously swimming around live rocks and feasting on undesirable hair algae and other algal or plant matter.

Because of the desirable qualities mentioned, a lot of novice aquarists often make the mistake of buying a tang for their first tank, only to have it die in less than a month. Whether you’re planning to purchase a tang or are simply curious about this interesting species of fish, this guide shall fill you in on the details you need in terms of tang origin, life span, care, feeding, and breeding.

Tangs are mostly found in the Indo-Pacific Ocean, though due to their popularity, most tang species are available in local pet stores. They have blade-like fins near their tailfins that they use when they quibble with each other, hence the alternative name, ‘surgeonfish’.

When taken care of properly, tangs can live for up to 30 years! A lot of aquarists have reported their tangs living for approximately 25 years, after which they become more prone to diseases like ich. Unfortunately, a lot of beginners can’t seem to keep tangs for more than a few months or even days. On that note, the next section talks about how to take care of a tang properly.

All species of tangs require large tanks due to reaching 6-12 inches in size when fully grown. Compared to clownfish or gobies that normally don’t need a lot of swimming space, tangs are used to swimming a couple of miles a day in the vastness of the ocean. They don’t host anemones, nor do they perch on live rock or dig caves to hide in; they explore trenches, crevices, and other places in the ocean that could possibly contain algae and other types of food. 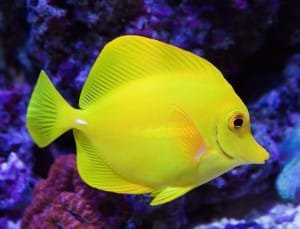 This means that in order to house a tang comfortably, one would need at least a 150-gallon tank or bigger. A lot of novice aquarists end up buying a tang and stuffing them in a 20-gallon tank just because they bought them at a particularly small size (usually about 1.5 inches or less). Unfortunately, tangs are fast growers and could easily grow a few inches in just a few months, given that they survive the stress of living in such a small space.

The unfortunate side-effect of putting a tang in too small a tank is that they become extremely stressed; imagine suddenly being forced to live in a box for the rest of your life – that’s the kind of stress tangs experience. Apart from that, tangs become highly aggressive when not given enough space to roam around. In any case, a longer tank is better than a taller tank – usually at least 6 feet of swimming space is sufficient.

If one obtains a large enough tank for a tang, it’s a good idea to put a lot of live rock rubble both in the refugium and the main tank, as tangs have quite a high bio-load and can quickly foul up the water without sufficient amount of live rock. Having a lot of live rock inside the main tank also gives algae or any other plant matter more surface to grow on, and consequently, more food for the tang to graze on. Take care, however, not to fill the tank with so much rocks that it doesn’t give the tang enough space to swim.

While tangs are generally hardy once established in a large, stable marine aquarium, they are prone to all sorts of diseases when stressed, especially due to their naturally thin slime coat. A lot of factors could easily lead to stress, including: small tank space, overcrowding, lack of food source, and poor water conditions. In any case, it’s a good idea to quarantine newly bought fish for at least a month in order to make sure that they’re disease-free and won’t introduce parasites into the main tank. A biweekly 10% water change may be enough for tanks that do not have sensitive corals and other invertebrates. If, however, one plans on introducing SPS corals and other sensitive corals then it’s important to invest in a quality skimmer rated for at least twice the tank water volume. One may also need to invest in an RO/DI unit to ensure that the water is free from organic impurities.

As mentioned before, tangs love algae and will thrive in an aquarium with a lot of it. Unfortunately, however, lush algae growth is often a sign of high nitrates and phosphates, which are detrimental to coral health. Also, for relatively small tanks, tangs may easily decimate algae in less than a day, therefore making it necessary to feed them vegetable matter. You can look for nori in any Asian grocery store, as tangs usually love them. Make sure, however, that you purchase an unseasoned one. Tangs can also eat Mysis shrimp, chopped scallops, and other types of meaty food.

To date, it’s almost impossible to get captive bred tangs because of how sensitive the babies are to water conditions. As mentioned before, tangs are quite prone to disease, and in such a small, closed space (relative to the ocean), it’s rather difficult to produce the perfect environment for the development of the baby tangs. Your best bet is to get a pair of tangs, place them in at least a 175-gallon system without any other predators in place, and produce nearly perfect water conditions (0 nitrates, 0 phosphates, etc.).