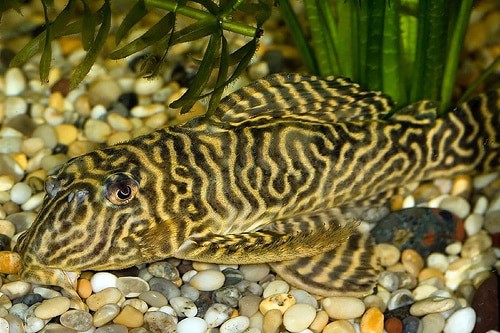 One of the best fishes you can include in your aquarium set-up is the Tiger Pleco. It has brown stripes that cover all parts of its body down to its fins. Its eyes are also striped with a pattern resembling that of the stripes on its head. Being territorial, this fish loves peace and quiet and prefers staying at the bottom of the tank. Average purchase size for this fish is 2-3 inches.

The Tiger Pleco belongs to the genus Hypancistrus, with code assigned to it as L-number LO66. Other names used for it are Scribbled pleco, King Tiger Pleco and Network Pleco. It can grow to a length of 4.7 inches. Adult Tiger Plecos have a different appearance from the one that they had when they were younger.

The Tiger Pleco naturally inhabits the rivers of Tocantins in Brazil and lower Rio Xingu where there is good current and the water contains high levels of oxygen. For this fish, it is not necessary to place large quantities of plants in the aquarium. In the rivers of Rio Xingu, where water temperature is high, the substrate contains minimal amounts of sand and stones.

You may put some driftwood and rock caves in the aquarium but never crowd the space with numerous plants. Water temperature should be about 82F. A tank that can hold 55 gallons of water is recommended for the Tiger Pleco.

The water in the Tiger Pleco’s natural habitat is a bit fast, so come up with an aquarium set-up that provides strong current. Always maintain high levels of oxygen inside your aquarium. The water should be a little acidic, but it can also be neutral. Keep water pH within the range of 5.8 – 7.0.

In the regions where the Tiger Pleco comes from, there is hardly underwater vegetation, so you don’t have to think about placing live plants in the aquarium. Instead, plan your aquarium in such a way that each of them have their own hiding spot. They love staying hidden in holes.

When buying driftwood (for the purpose of providing hiding places), choose the “bog wood” type, which is good for the digestive system of all types of plecos. If you’ve got no driftwood as of the moment, you can temporarily settle with rocks, terra cotta spots or PVC tubes. Anything that’s good for hiding would be fine. If your Tiger Plecos don’t have places to hide, they can easily get stressed.

When picking an aquarium for Tiger Plecos, you have to factor in their aggressive behaviour which becomes more pronounced as they reach adulthood. The size of the tank should be at least 55 gallons. As your Tiger Plecos become adults, it is important to consider two things. One, it can be a good time to move other plecos to another tank. Two, it might also be best to buy a larger tank with a space that can accommodate everyone in the community. The goal is to provide as much space as possible.

When choosing filters for your aquarium, you should think not only about the size and the aggressive behaviour but also about the plecos’ large appetite. Your tank should be heavily filtered as they can put a large strain on these materials. A huge HOB filter would do, but you can do better if you can add up a sponge filter with a large size, too.

The Tiger Pleco is a peaceful fish. It is easy to combine with other fishes, but take note that it is also territorial and can be antagonistic against a member of the same genus.

The Tiger Pleco prefers a surrounding that has lots of hiding places which provide shelter especially in the daytime. The reason for that is because this fish is nocturnal, meaning you will hardly see it indulging in any activity during the day. After some months in your aquarium, it might exhibit activity in daytime hours, but still you must maintain an environment with a lot of resting spots.

Some people might tell you that because the Tiger Pleco is a sucker fish, it will be enough for you to feed it with algae alone. That’s true, but you shouldn’t limit this fish to that kind of diet only, as this will cause it to become malnourished.

Tiger Plecos are actually omnivores and besides algae, they also feed on insects and tiny crustaceans in the wild.

Offer them a steady diet of algae wafers and bloodworms and they will meet all of their nutritional requirements and will be happier for it. The alga wafers that we recommend are the Algae Wafers from Hikari.

Fruits and vegetables are ideal food items like melons, shelled peas, zucchini medallions, lima beans and broccoli. Fiber is important in their diet, but don’t give them fruits and vegetables that are acidic. Tomatoes, grapes and oranges are examples of these foods.

If you intend to breed Tiger Plecos, make sure that your tank is really big, since they are very aggressive. You can start with two females and two males. Each male will try to find a comfortable cave to breed in and as soon as it finds the right place, it will start cleaning the surrounding with the purpose of attracting a female into that cave.

Once a female is enticed, it will soon lay eggs on a side of the cave. The male will then set himself to guard the breeding area and do continuous fanning over the eggs until they hatch.

Male Tiger Plecos grow bigger than their female counterparts and develop colour patterns that are darker. The odontones are also longer in males and more bristles can be found along the pectoral spines.

There are indications that a tiger pleco is sick. These include altered or decreased activity, skin lesions, clamped fins and isolation. Common diseases are bacterial infections, dropsy, fungus, lymphocystis, internal parasites, pop-eye, tuberculosis and velvet.

The best defense against these diseases is prevention. Limit stress in the environment. Do frequent water changes. Avoid overcrowding as Tiger Plecos really love space. Avoid overfeeding and always maintain a balanced diet for them and buy fishes from a shop that is reputable and one you can fully trust.

What Are Aquarium Air Stones? Do I Actually Need One?