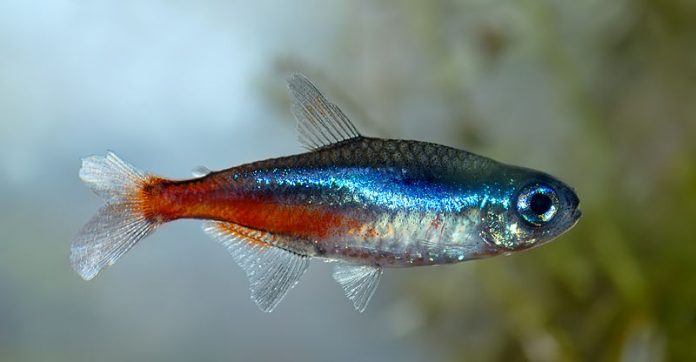 Fin rot is particularly common among tropical fish, especially those who are kept in freshwater aquariums. Fortunately, this health condition is easy to spot because its physical manifestations are very specific. The fins of aquarium fishes typically have smooth or consistent edges.

If not treated as soon as possible, the fish may die due to bacterial infection and have impaired mobility and balance.

How Can I Cure Fin Rot?

Let’s get straight down to the reason why you are here. You’re looking for a way to treat fin rot because your fish is showing symptoms. I’ve never been one to beat around the bush, so let’s start with the cure…

Although fin rot is prevalent, it is highly treatable. Medication such as Melafix and Aquarisol are usually added in the aquarium water to kill the bacteria that causes fin rot.

The best method to treat Fin Rot is to kill the harmful bacteria in your aquarium with a product like Melafix.

We have used Melafix for years with no adverse effects and with a very high success rate for treating the disease. It’s the gold standard of Fish medication and should be sufficiently stocked in the cabinet of every aquarium owner.

Chewy.com have an autosave feature that allows you to subscribe and save money on each delivery. It’s worth checking out so that you’ve always got some Melafix on hand. It really is the best cure-all treatment. (P.S You can currently get 30% off your first Autosave order)

Not All Medication is Safe to Use

Drugs such as Tetracycline, Oxytetracycline, malachite green methylene blue and Chloramphenicol are also used to treat fin rot. However, take note that medication can be stressful to fishes. They filter the water through their gills so they are ingesting significant amount of the medicine.

There are some instances that fin rot is accompanied by fungal infection. Fin rot usually starts from the edges of the fins and tails. However, if you see holes then it’s a likely indication of fungal infection.

If the fin rot is rapidly spreading, meaning the fins and tails recede significantly within 24 hours, then it could be a columnaris infection.

There are many identified causes of fin rot. Fin rot itself can be a disease or a symptom of a more serious health problem but the root cause of this disease starts from the environment. It could be caused by other fishes in the aquarium.

Because fin rot is a disease caused by gram-negative bacteria such as Vibrio, Pseudomonas and Aeromonas, it can be transmitted to other fishes through physical contact and infected aquarium water. In other cases, a fish nips the tail and fins of other healthy fishes. This can become infected and result to fin rot.

An overcrowded aquarium risks the fishes to fin rot. Water quality becomes poor, pH fluctuates, and levels of nitrite and ammonia increases due to waste products.

Aquarium water that is too cold can also contribute to fin rot.

Feeding your fish with outdated food or leaving large amounts of food floating the entire day can build a breeding ground for bacteria that causes fin rot.

Stress also contributes to fin rot. Playing with your fish, handling and moving them to another aquarium improperly can stress your fish. Some fishes are territorial and dominant so their presence can stress other fishes in the tank. If you introduce a new fish, it helps to rearrange the decoration to “reset” their surroundings.

The most notable physical sign of fin rot is the presence of uneven white, fuzzy lining on the edges of fins and tails. The fins and tail may turn more opaque or milky. They may appear inflamed or blood streaked.

Soon, they would start to fray and appear ragged. In most cases, fin rot is only noticed when it’s in its advanced stage, that is, when pieces of the tail and fins start to fall off and the white edges become thicker. White dots can be present sometimes.

Your tropical fish can feel that their fins and tail is slowly disintegrating. Fin rot causes the fish to become listless. Your fish may also attempt to seek relief by rubbing itself against the tank and aquarium decorations. If fin rot is caused or aggravated by nipping, the fish will feel stressed or “bullied.” Overall, fin rot doesn’t cause any other behavioural problems.

How To Prevent Fin Rot From Reoccuring

When buying your tropical fish, make sure to check the fins and tails carefully. Be aware how mild and severe fin rot looks like so you can take a close look at each fish species of your choice.

As mentioned, fin rot is a bacterial disease so if you introduce an infected fish to the aquarium, the bacteria can spread to other fishes as well.

As soon as you notice fin nipping activities, separate the fishes. Nipped fins can become infected. Since the fish’s environment is the main contributing factor to fin rot, make sure that you change the aquarium water periodically.

The frequency depends on the size of the aquarium and the number of fishes in it but generally, 1 gallon of uncycled water should be replaced every 3 days whereas a 5-gallon tank every 7 days.

If you notice one of your fishes developing fin rot, isolate it immediately so it won’t affect other fishes. Clean the aquarium and rinse the sand and all decors with boiling water to disinfect them. Use a screen filter when rinsing the sand so food debris and other waste are washed away.

Clean aquarium water is the best prevention. You may also add a pinch of aquarium salt to your freshwater tank to act as a mild antiseptic. We love this one from API. You can pick it up for a few dollars on Chewy.

Please keep in mind, however, that aquarium salt should not be used if you have a scaleless catfish.

You can also add live plants such as Java moss and Java ferns. Keep the temperature of the aquarium and the pH at proper and stable levels. Fish food that is left in the aquarium gets stale, thwarts the water’s pH and eventually becomes a breeding ground for bacteria so it helps to feed your fish small amounts periodically rather than sprinkling a large amount once and thinking it would last the entire day.

Buy fish food in amounts that can be consumed within 2 months to ensure that it hasn’t lost its nutritional value.