Ghost Shrimp, also commonly known as Glass Shrimp, are a class of decapods crustaceans, swimming crustaceans commonly seen in freshwater aquariums. Their easy availability means that they are a common addition to many tanks. They generally have two positions, one as feeders to larger fish and the second as highly effective tank cleaners. Easily overlooked by most enthusiasts, the Ghost Shrimp is an interesting and active addition to a small freshwater aquarium.

Ghost Shrimp are a small invertebrate, growing to a maximum of 1.5 – 3 inches in length. They are transparent, with a yellow to orange spot in the center of the tail. They have 10 legs and their body is segmented.

Females are larger than males, have a green saddle that runs underneath their body (absent in males) and a ridge on top of their tails that is very pronounced.

The earliest dated shrimp fossils found are from the Lower Jurassic and Cretaceous periods. Ghost Shrimps originate from North America and have been in the hobby aquarium ever since people began creating aquaria in the 1850s. Palaemonetes paludosus is the Latin name and they are common in the southern states, east of the Appalachian Mountains. They are bred in captivity throughout the world and have generally been used as feeders for larger, more aggressive fish.

Known as pests to clam farmers who spend a fortune clearing them from their clam farms, Ghost Shrimp are omnivores which will eat just about anything left in the tank. They will feed on leftover food, parts of live plants that shed and even on dead tank mates. It’s important to remove dead fish from the tank as soon as possible though, as they may cause an ammonia spike in the tank. They will also eat flake foods and sinking pellets, even ones intended for other fish.

Algae are another source of nutrition for them, so they’re best kept in an environment that’s not too clean. One algae pellet per day will feed a tank with lots of shrimp, but take care not to put them in a tank with much smaller fish as they will occasionally attack and eat them. These shrimp are scavengers and they can often be seen swimming upside down at the top of the tank waiting to feed on food flakes.

How To House Ghost Shrimp

These small invertebrates are best kept in a small tropical aquarium environment. The ideal PH is 7.2 and the ideal temperature is 75 Fahrenheit. The water should be fairly hard and certainly within the range of 3-15 DKH (degrees of carbonate hardness). Although the shrimp can survive in lower temperatures they become less active the lower the temperature. In this environment their peaceful nature can lead to them being attacked. They certainly thrive in slightly warmer temperatures, but they have been known to become more active in warmer climates, resulting in them attacking other species within the tank. It’s therefore important to attain the right balance of temperature to ensure the ecology system of the tank.

The aquarium should contain live plants and some hiding places for the shrimp to escape to from time to time. They burrow so they need some sand or gravel to give them a place to hide. Ghost Shrimp molt and when their shell is regenerating they are very vulnerable to other tank mates. So they need a space to hide during the molting process.

Ghost Shrimp are best kept with similar species, such as the Amano Shrimp (as long as it’s larger than the Ghost Shrimp), Bamboo Shrimp, Vampire Shrimp, Nerite Snails, Gold Inca Snails and Ivory Snails. Any larger fish will feed on them so it’s important to keep them in a separate aquarium. 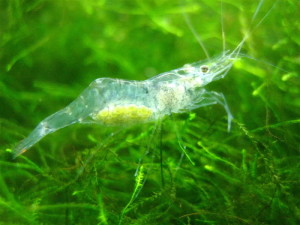 Shrimp are burrowers and they use this technique to feel safe within the tank and to feed. Their 10 legs are used for different purposes, always keeping them busy and on the move. The claws of the first and second set of legs are used to help them dig their burrow. When they create their burrows of about 2 – 3 feet in length, they use another set of legs to hold the sandy mud. Whenever they reach the capacity that they can carry, they turn around and exit the burrow, depositing the sand outside. They continue this until they have created a collection of burrows with at least two openings. These burrows are only temporary and the Ghost Shrimp will create new burrows in a never ending cycle.

The remaining legs are either used for grooming or bracing the shrimp whilst it’s burrowing.

When being transferred into your aquarium environment the likelihood of some of them dying within the first couple of days is high. If the shrimp survive the first few days they can live up to one year or slightly more.

Ghost Shrimps go through a molting stage in their lifespan. This is the process where their outer shell drops off as they eat and grow. During this period the shrimp is very vulnerable, so it is very important that they have somewhere to burrow during this time, preferably live plants or somewhere with lots of little hiding places.

It’s an amazing transition to watch live, if you can catch it. Have a look at this video to see exactly how they do it…

These shrimps are difficult to breed, simply because their eggs hatch as free floating larvae. They do not metamorphose into miniature versions of the adults until at least a week and therefore it’s difficult to keep an eye on them. When the eggs are hatched, they need a good powdered algae such as Spirulina, and they should be kept in a separate tank until they have reached the stage where they look like their parents.

As with all shrimp, it’s very important to ensure no copper is introduced to the water system. Copper is toxic to Ghost Shrimp and is contained within many fish medication. If you need to medicate other species make sure you remove your Ghost Shrimp to another tank to ensure their survival.

How to Breed Red Cherry Shrimp