The Honey Gourami (scientifically known as Trichogaster Chuna) is a species of small tropical fish that belongs to the popular Gourami family. Honey Gouramis are not as popular as Dwarf Gouramis due to the fact that their colourings tend to look bland and boring in a retail environment, and few people know enough about them to know that their colours only start to develop when they are happy and around familiar fish.

When Honey Gouramis are looked after properly and they are housed in an ideal aquarium for their requirements, the colours that they start to develop are stunning.

As the name suggests, the most dominant colour that they develop is a beautiful honey shade of brown with the occasional appearance of fiery red and dark blue and black.

For this reason alone, we would recommend Honey Gouramis as an excellent beginner fish.

Honey Gouramis are a small fish who only grow to around 3 inch in length (2 inch for females) and they are incredibly peaceful and playful fish. While they can easily be housed in a 10 gallon aquarium, we wouldn’t recommend it.

Honey Gouramis get bored very easily so they do require a lot of plants, decorations and places that they can explore. Because of this, we would recommend at least 20 gallons at a minimum.

As we previously mentioned, Honey Gouramis do love busy aquariums in regards to both other fish as well as lots of plants and decorations. Honey Gouramis are incredibly playful, and they have a tendency to become down and depressed if they don’t have any other peaceful fish to play with or sections of the tank that they can explore.

In terms of the water specifications, we would recommend keeping your tank water relatively soft with a pH of around 7.

Also keep in mind that Gouramis are labyrinth fish, so make sure you leave plenty of room between the top of the water and the hood of your aquarium for them to get plenty of air.

Honey Gourami Diet: What Do They Eat?

Just like most other Gouramis, the Honey Gourami is an omnivorous fish. They will do well with almost any type of food but as always, we recommend feeding your omnivorous fish a varied diet to not only make sure they are getting all of the nutrition they need but to also keep them happy. 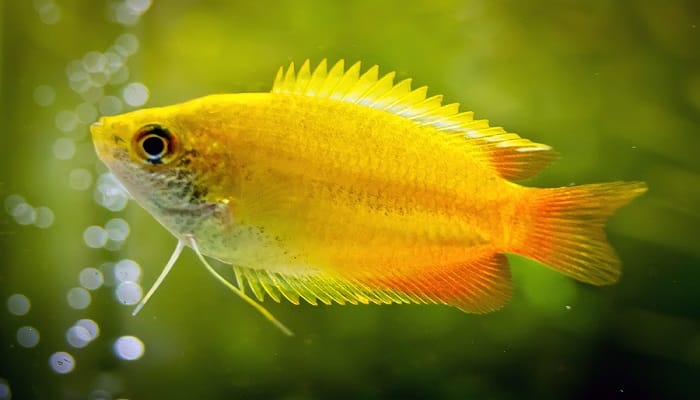 Tropical fish flake foods or pellets are a good base food, but every now and then you can supplement with fresh vegetables, freeze-dried blood worms, algae and occasionally some live food.

A good quality flake or pellet is an affordable way to make sure your fish get all of the proper nutrition they need to maintain their health and colours. The food that we recommend and use ourselves is TropicalMin Tropical Flake

Being a small, peaceful fish, it’s important to remember not to keep Honey Gouramis with too many larger, more aggressive fish. Not only will they struggle to compete for food but they will also be constantly intimidated and unable to thrive.

To learn more about other tropical fish, check out our Freshwater section. 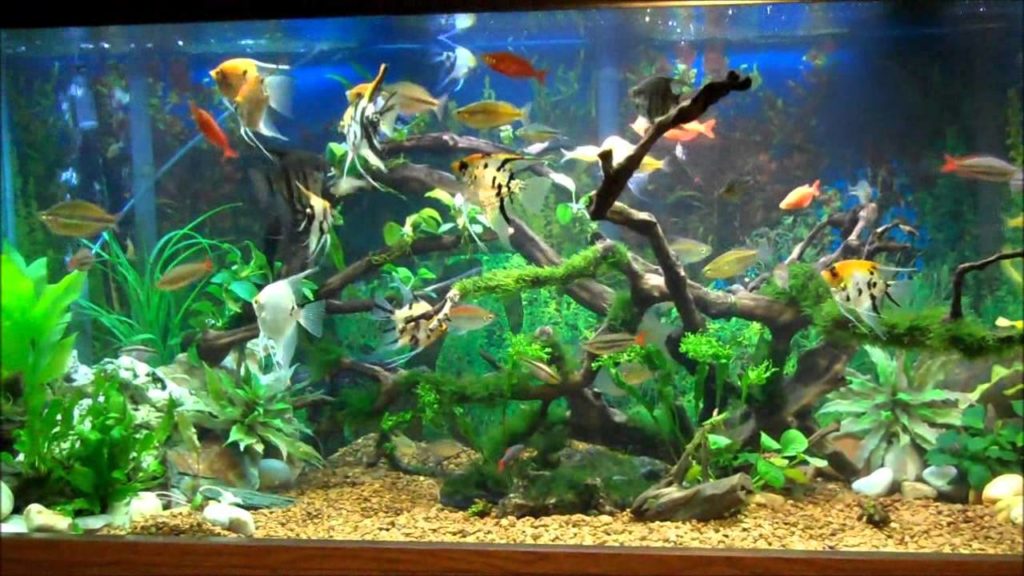 Other types of Gouramis that make good tank mates include Dwarf Gourami, Gold Gourami, Pearl Gourami and Blue Gouramis. We wouldn’t recommend keeping Honeys with Kissing Gouramis, Samurai Gouramis or Paradise Gouramis as they tend to grow too big and can be too aggressive.

Honey Gouramis are a very peaceful fish, but we would still recommend keeping more females than males. As with most fish, male Honey Gouramis can sometimes get more aggressive towards other males during spawning.

How To Breed Honey Gouramis

Another reason why we recommend Honey Gouramis as a good fish for beginners is that they are easy to breed. To initiate breeding, simply reduce the water in the tank by around 8 inches and increase the temperature by around 10 degrees (Fahrenheit) to around 80.

Male Honey Gouramis will then start to build bubble nests on the surface of the tank and will spend the next few days defending the site. Once the eggs are laid by the females, it’s a good idea to move them to another tank. After the eggs have hatched, move the males to another tank also.

Honey Gourami eggs will typically hatch within 2 days of being laid.

It’s possible to think that each lump on your betta fish is cancerous and fatal when some are not. It can be scary to fishkeepers when their betta fish develops a tumor that causes poor health or...

The blue velvet shrimp (Neocaridina davidi var. blue) is a species of freshwater shrimp with an electrifying blue color. If you’re looking for an addition to your aquarium that’s easy to care...