If fast paced, playful and colorful are what you are looking for in a freshwater fish, look no further than the Tiger Barb. The black stripes that wrap around the width of this gold/silvery colored fish make it instantly recognisable.

The healthier fish will have bright and vivid base colors as well as a hint of red on the tip of the tail, fins and nose.

The Tiger Barb is relatively easy to care for and will grow to a maximum of 3 inches in size once they reach adulthood, making them the perfect size for either a community tank or a species-specific tank.

However, it’s worth bearing in mind that Tiger Barbs are a semi-aggressive fish that are notorious for nipping the fins of slower, more docile fish. Because of this, they are not always recommended for community tanks especially if you want to keep less than 5 or 6.

Tiger Barbs are schooling fish and will not be able to thrive in any numbers lower than 5 or 6. The nipping is also massively reduced if they are kept in larger schools, so if you want to add them to a community tank, make sure there are plenty of them in there.

In terms of their lifespan, a healthy Tiger Barb will typically live anywhere from 5 to 10 years. Keeping your Tiger Barbs in tip-top condition isn’t difficult. This guide will tell you everything you need to know in order to help your Tiger Barbs thrive.

Due to their small size, keeping a larger school of Tiger Barbs does not require as much tank space as you would imagine. With that being said, Tiger Barbs are incredibly active fish who love to swim around frantically so providing them with plenty of space to manoeuvre at will is very important. 30 gallons is generally what we would recommend (at a minimum).

What Do Tiger Barbs Eat?

Tiger Barbs diet (and all other species of Barb) is omnivorous by nature. They will eat almost any food that you offer them including tropical fish flakes.

For a daily food choice, we would recommend a veggie based fish food such as Omega One Veggie Rounds. Tiger Barbs are a colorful fish so it’s important to offer them a food that will support their colors and overall vibrancy.

To boost up their protein consumption and to offer them a treat from time to time, Tiger Barbs will happily accept an occasional feeding of freeze-dried and live foods including Brine Shrimp, Daphnia and Bloodworms. 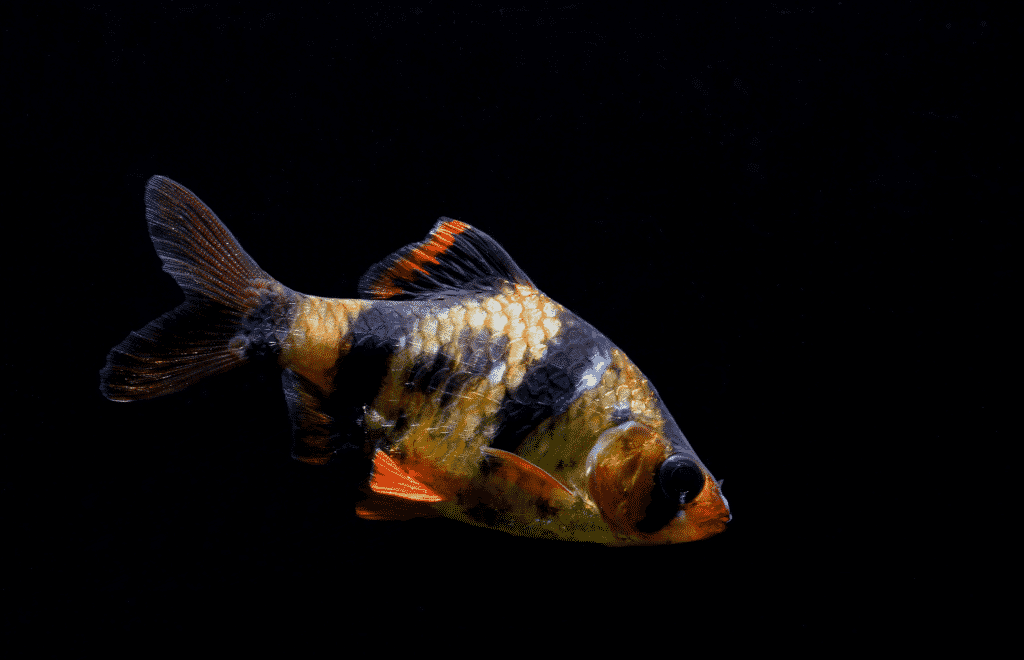 If you are interested in breeding Tiger Barbs, there a few things you need to take into consideration before doing so. First of all, Tiger Barbs will happily eat all of their eggs if given a chance, so if you are serious about seeing a breeding session through to completion, make sure you have either plenty of plant matter for the eggs to get lost between or a marbled bottom to allow them to sneak between the cracks.

To initiate breeding simply separate the males and the females and keep them in separate tanks for 3 to 5 days. The females need to be housed in a large, marble bottomed tank with a heater to keep the temperature at a consistent 80 degrees (27 Celcius). Feed the females a high-protein diet and complete a 30% water change every day.

As soon as you spot a pregnant female, you can reintroduce them to the main breeding tank with the males. Pregnant females will have a considerably larger, rounder belly and will have a darker (almost pitch black) dorsal fin.

Tiger Barbs will produce hundreds of eggs and the males will follow closely behind to fertilise them all. Again, we recommend building an environment that will facilitate in “hiding” the eggs from the adults until they begin to hatch.

The fry will develop in around a weeks time and will start to swim freely anywhere up to 5 days after they are hatched. In terms of their diet, we would recommend either an all-liquid diet or a combination of liquids and mushed up brine shrimp.

To repeat what we mentioned earlier, Tiger Barbs are not always the best choice of fish for a community tank. However, being shoaling fish, if you keep them in schools of 6 or more (the more the merrier) they will generally keep to themselves and will spend their days chasing each other around the tank rather than terrorising their neighbours.

We would not recommend keeping Tiger Barbs with other fish that have long, flowing fins such as the Betta Fish. It’s just not worth the hassle! 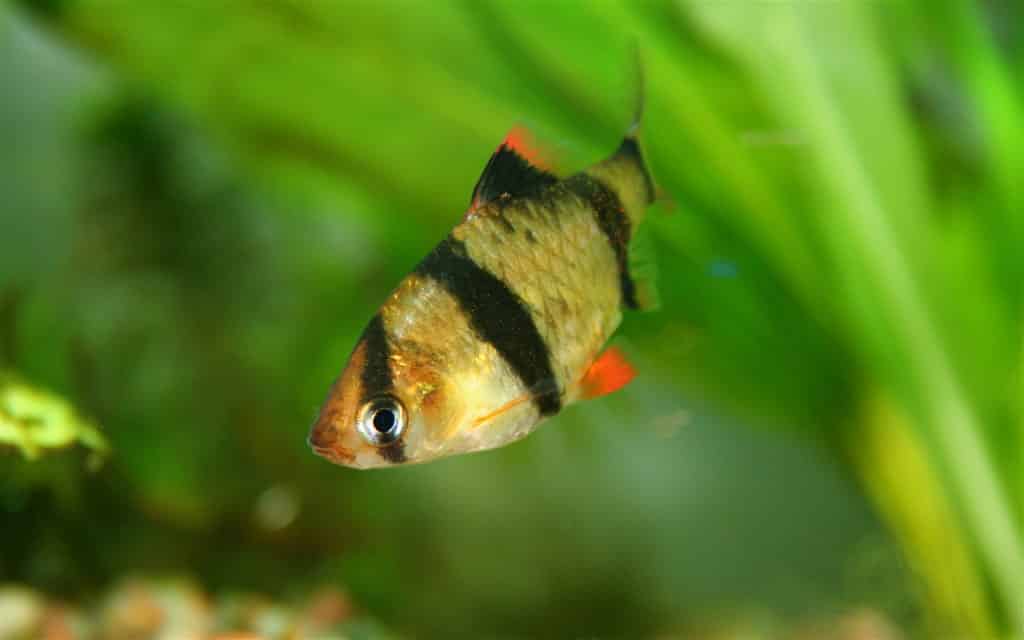 Suitable tank mates that we would recommend include any other fast-paced fish or schooling fish such as Tetras, Danios and Platys. Most species of Catfish will live well with Tiger Barbs too.

You can try and keep Tiger Barbs with any fish if you can keep them in a larger school (they are only semi-aggressive) but you will be doing so at your own peril.

There are no specific diseases that affect just Tiger Barbs but they can be more susceptible to the more common diseases such as ich and cottonmouth.

As with any other fish, the best advice we can give you is to make sure your water condition is as close to perfect as it can be and you shouldn’t have many problems. Good filtration is always a good place to start.