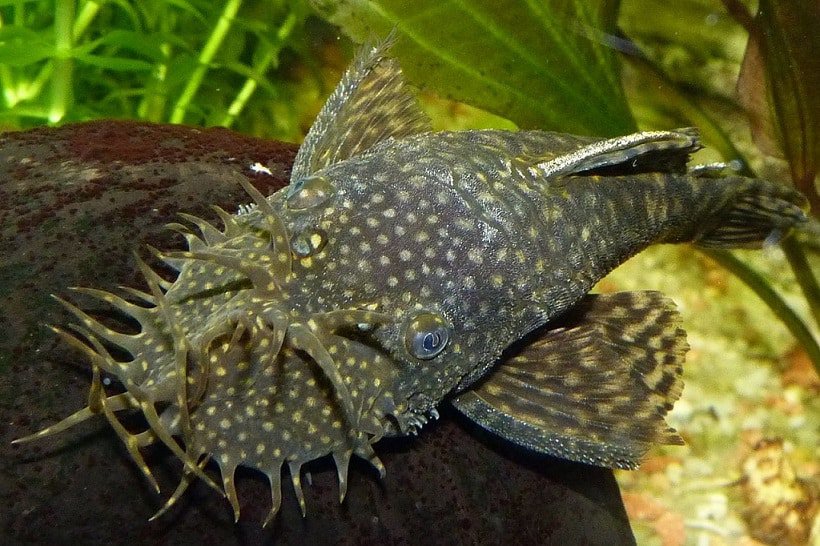 The Bristlenose Pleco. One of the most popular species of Pleco fish you will find in home aquariums all over the globe.

Also known as the Bushy nose Pleco, these easy to care for tropical freshwater fish are perfect for beginner aquarists, and advanced aquarists alike.

Most commonly found in the Amazon river basin of South America, the Bristlenose Pleco is a hardy fish which can survive and thrive in a variety of different habitats.

If you have already read our article on the 12 best algae eaters for a freshwater aquarium, you will already know how highly we recommend the Bristlenose Pleco as an algae eating fish.

Not only are they incredibly hardy and easy to care for, but their sheer size allows them to consume massive amounts of algae in a short amount of time, as opposed to a smaller algae eater such as a snail or a shrimp.

If you are looking into investing in a Pleco fish for it’s algae eating traits, then we would highly recommend the Bristlenose Pleco over the Common Pleco, purely because of the size constraints that the Common Pleco can have.

While the Common Pleco can grow in excess of a foot long, the Bristlenose Pleco will generally grow to a maximum length of around 6 inches, making them perfect for home aquariums with at least 30 gallons of water or more.

Let’s jump straight into the Bristlenose Care specifics… The Bristlenose Pleco will be absolutely fine in a 30 gallon tank, but because of their size, and the amount of food that they consume, they do produce a large amount of waste.

If your Pleco is sharing the tank with a bunch of other fish, then it’s recommended that you either house them in something a little bit bigger, or you invest in a top of the range filtration system.

If you own a larger tank, then a hang on back filter and a sponge filter will generally do the job, but if you want to be safe, we would recommend investing in a quality canister filter.

In terms of the best water temperatures and pH range for Bristlenose Plecos, we would recommend anywhere from 60-80 degrees Fahrenheit, and a pH range of 5.5 – 7.6.

Bristlenose Plecos are an incredibly hardy fish, so the temperature and pH range is a bit broader than you would expect for a more fragile fish.

In the wild, the Bristlenose Pleco will generally spend the majority of it’s day doing two things: foraging for food, or hiding in a safe, cosy place such as under a rock, or a piece of driftwood.

When setting up your tank to accommodate the Bristlenose Pleco, you should keep this in consideration.

A large piece of wood, a piece of PVC piping or a plant pot are a few examples of hiding places that will suffice.

What Do Bristlenose Plecos Eat?

The two main pieces of information to take away from this article regarding the Bristlenose Pleco diet is that they are bottom feeding fish, and are predominantly vegetarian.

This tells us two things .. Bristlenose Plecos LOVE plant-based foods and require them to be in tip-top condition, and any fish foods that are fed to them need to sink to the bottom of the tank.

A plant-based sinking pellet would be the best choice for an ‘all-rounder’. The one that I use and recommend is the Tetra Pro Pleco Wafers. They are nutritionally adequate, they sink quickly and they don’t murky up the water like a flake food tends to if left uneaten.

However, as always, make sure you remove any leftover vegetables from the tank within a day of feeding them, as to prevent them from fouling the water in your tank.

Bristlenose Plecos, being a predominantly vegetarian fish, do require a large amount of fiber in their diets to stay healthy.

If you are feeding them enough vegetables, you should not have a problem with this, but it’s better to be safe than sorry, in case you ever forget to stay consistent, or you are unavailable to feed them fresh vegetables.

If that is the case, then the Bristlenose Pleco will need to obtain fiber from somewhere else. Logs of wood such as driftwood are made up of fibrous matter, which can provide the Plecos with all of the fiber that they need. A small piece like this one will take up barely any space and will keep your Plecos snacking for a long long time.

As we previously mentioned, Bristlenose Plecos are fantastic algae eating fish, so a large part of their diet will be built up of algae.

To supplement their love for algae, and to keep them as healthy as possible, you can also offer them an algae wafer from time to time. (These Tetra wafers are the best bang for your buck)

Another tip to keep in mind, if you are ever going to consider breeding your Bristlenose Pleco, is that you can encourage the breeding cycle by offering them live, and frozen foods such as daphnia, bloodworms and blackworms.

Again, the Bristlenose Pleco is a bottom feeding fish, so it’s important that the live and frozen foods sink to the bottom of the tank, in order for them to be seen.

Live and frozen foods are not an essential part of the Bristlenose Plecos diet, so don’t stress too much over these. Plant based wafers and pellets, and plenty of green vegetables will be more than enough to keep them happy.

If you are interested in breeding the Bristlenose Pleco, then you are in luck, as they are one of the easiest Pleco fish to breed at home. The first part of the breeding cycle is to induce spawning.

To increase the chances of a successful breed, we would recommend at least a 2 to 1 ratio of females to male.

Remember the hiding place that we mentioned earlier? This is where your Plecos will generally breed, so make sure there is plenty of space for them to do their thing. To induce spawning, we recommend a water change of at least 50%.

This will trick the Plecos into thinking it’s the rainy season, which is when they prefer to start breeding.

The only other tip when trying to induce spawning is to make sure you are feeding the fish plenty of high quality food. More live foods would be recommended during this time.

Once the water change has taken place, the rest of the breeding process will pan out on it’s own. The male Pleco will find his territory and will make it his own, defending it from the other male Plecos in the tank, if you have any.

Male Bristlenose Plecos are very territorial, and when they are looking after their eggs, they will be constantly having to defend themselves from other fish in the tank

The females will enter the ‘cave’ with the male, and will deposit the eggs to the upper surface of it. The eggs will hatch around 10 days later.

It’s worth noting that other fish will constantly be on the lookout for ‘free food’ and will not hesitate to eat the Pleco fry if they are left to their own devices.

To increase the chances of a successful breed, you can simply transfer the container with the eggs attached to them, to another tank.

Once the eggs hatch, the newly born Bristlenose Plecos will begin feeding on algae around the tank. However, the fry can also be fed a variety of foods including Infusoria and powdered spirulina.

As the fry start to grow, you can begin introducing more live foods into their diet, and eventually more and more plant based foods and vegetables.

Identifying the sex of your Bristlenose Pleco is pretty straight forward. Males tend to grow a lot faster than the females, and the bristles on their noses tend to be much larger in size.

The Bristlenose Pleco is a brilliant fish for beginner fish keepers thanks to their peaceful and sociable temperament.

You can successfully house Bristlenose Plecos with most other fish in a community tank. Their hardy nature also allows them to feel comfortable in a wide variety of tank conditions.

As we mention early during the breeding section, male Bristlenose Plecos can be extremely territorial and competitive when it comes time for breeding, so keep that in mind when deciding on how many of them to purchase.

Other than that, you are free to peacefully house your new Plecos with almost any other community fish.

Are Bristlenose Plecos susceptible To Diseases?

This species of fish is not known to be prone to any specific diseases. As long as your tank is in good condition, clean and the fish have plenty of hiding places, you should have no problems at all.

What Is The Scientific Name For The Bristlenose Pleco?

The scientific name is Ancistrus Cirrhosus

What Is The Lifespan Of The Bristlenose Pleco?

They will generally live around 20 years if they are looked after correctly, and they are healthy.

Logan Pricehttps://www.fishkeepingadvice.com
I created this website to help fellow fishkeepers get accurate and helpful information at the click of a few buttons. I love sharing my tips and tricks to help make you a better fishkeeper, so stay updated by following us on Social Media!

Swordtail Fish: Everything You Need To Know

What Exactly Is Fin Rot? The Causes, Symptoms & Cures

Fishkeeping Advice is a member of the Amazon Affiliate Programme. Purchases made through the Amazon links on our website will earn us a small commission, at no extra cost to you. This helps us stay afloat and producing new content.