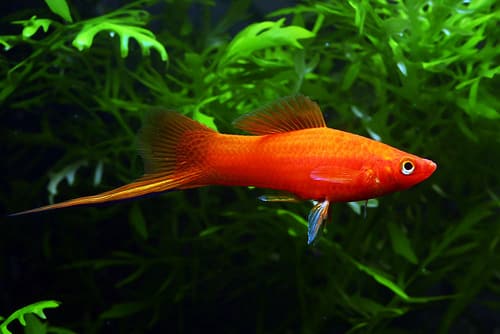 Swordtail, the freshwater fish one can easily mistake for a Guppy or a Platy, is one of the best choices for a pet fish, especially for beginners. Its colours vary. Caught from the wild, the body of the swordtail is generally olive green with yellow and red streaks along its two sides. The wild type of this fish is called Red Swordtail or Green Swordtail.
For some very rare varieties, one would observe colourful and vibrant spots dotting the fins. In captivity, swordtail has been selectively interbred, resulting to a wider range of mixtures of colours. The name swordtail gives justice to its appearance – specifically, the male’s appearance. The male’s caudal fin protrudes along its lower half, the length of which can reach up to half of the body’s entire length. The female caudal fin has no such protrusion.

The swordtail belongs to the group of livebearer fishes – scientifically classified as Poecillidae – to which the mosquito fish, the guppies, the mollies and the platies belong. This group gives birth to live fry. A female swordtail can produce offspring as often as every four weeks.

A female swordtail can be interbred with a male member from the platy family of fishes, so one of the options for achieving variety is mixing these two groups in one aquarium. When buying from a fish shop and you’re looking for a male pure swordtail, make sure with the shopkeeper that it’s indeed a purebred. Even if it came from a tank labeled “swordtail only,” it can turn out to be a platy. Examine the caudal fin, although some male swordtails lack the protrusion.
In an aquarium, a female swordtail may ignore the presence of a male, especially if she is a newcomer. Hobbyists think that the strange behaviour does not mean she isn’t capable of mating with a male member of her group or she is plainly uninterested, may be because the new fish is still getting accustomed to her new surroundings.

Breeding can start from the 3rd month of age, so it is advised that swordtails be separated after determining sex. You may see the bellies becoming bigger, but the sure sign they are close to giving birth is when they start separating themselves from the males and they suddenly become aggressive towards the male swordtails. A female about to give birth will hide in one corner and limit her movement within that area.

The best temperature for breeding is 78oF. Other parameters like kH, pH, ammonia, nitrites and nitrates should be checked and kept within safe levels. Doing so would lessen stress and encourage spawning.
Swordtails can produce 50 – 100 fry every time and may give birth again four to 6 weeks after the first birth. It may take longer. According to experts, the second birth session can even take up to a half year after the first, and that can take place even without the presence of a mate. Swordtails can keep sperm cells inside their pouch and fertilize on their own over and over again.

It is natural for this fish to eat their fry. The solution to that is to make sure that they are well-fed as they get closer to giving birth. Feed them two times a day. As soon as you see the fry swimming, rescue and transfer them in another tank. The size will be like that of the point of a pen and they will look as clear as bubbles. You probably need to check how it looks in a nearby shop, so you’ll have a fair idea. If you can’t be there always to ensure that the baby swordtails can be rescued at once, putting hideaway places is the best alternative. Buy some driftwood and stones.

Caring for swordtails is easy, the only thing that you really need to be sure of is the size of the tank. Although several swordtails can live in a 10-gallon aquarium, it would be better if they have a larger space to move about. This fish loves space and will give birth earlier if this requirement is met. A 20-gallon tank is the minimum, but a larger size would be much more welcome. Remember that they can produce offspring in as little as three months and would continue to give more every after 4-6 weeks. Another possibility to consider is the fact that this fish can produce 150 babies in one birthing.

Most swordtails come from Belize, Guatemala and Mexico, where they can be found in almost all places that has a freshwater source – like mountain creeks, streams and rivers at the lower parts of these countries. The waters in those areas are rapidly moving, have high oxygen content and have an acidity range from 5.5 to 7.8. Water hardness is from 1 DH to 24 DH. The water temperature seems to be the same all throughout those regions, which is 75 degrees. In their captive condition, swordtails seem to be at home best with water that has 10 – 15 DH, is moderately alkaline (at 7.2) and with temperature ranging from 72 – 79oF.

Swordtails are omnivorous eaters. Insects and plant particles form a large part of their meals. In an aquarium, they should be given small live foods. Flakes and commercial foods like those that have been frozen or freeze-dried will work just as well. Make sure that the meals contain large amounts of meat and live foods.

New babies search for food as soon as they are out in the water. They can be given newly-hatched brine shrimp and finely crumbled flakes. Growth for swordtail fry is slow. If you want them to grow faster, change the water frequently and provide a good quantity of meat.

Swordtails are livebearers, meaning the process of giving birth can put a lot of strain on their small bodies. As they grow older, they become more lethargic and their colours appear duller, although they don’t just die due to age. They begin declining as age progresses, but what kills them usually is some disease or some physical stress. The average life span is three to four years. Some die earlier because of the strain that they get from giving birth.

What Are Aquarium Air Stones? Do I Actually Need One?