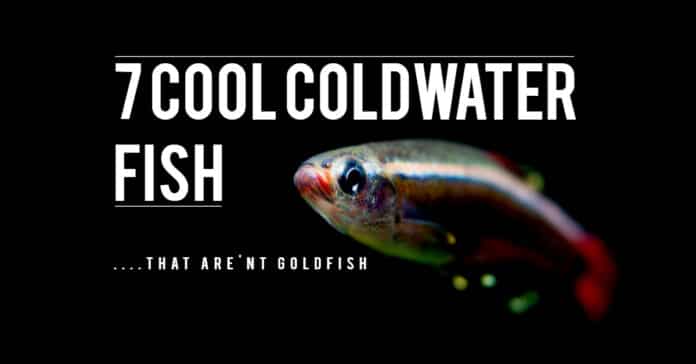 Coldwater fish (outside of the well-known Goldfish, of course) are probably not as well-known as their freshwater and saltwater cousins, but that shouldn’t discourage you from setting up a Coldwater tank of your own.

There are many exciting Coldwater fish species that you can keep to make your home aquarium as colorful and as vibrant as Fresh and Saltwater aquariums.

In fact, a lot of the fish on this list are predominantly found in tropical aquariums and not just coldwater aquariums. They can live happily in both.

If you are interested in keeping Coldwater fish and need ideas for fish that aren’t Goldfish, here are 7 of my favorites…

“Minnow” (as the avid fisherman reading this will know) is a commonly used generic term for bait fish.

They tend to be dull in color, cheap, and widely available.

But don’t let that put you off.

Minnows that are bred for home Aquariums are vividly colorful and interesting fish to observe.

Minnows can survive in both Freshwater and Coldwater aquariums, though some species prefer the cooler temperatures of the mountainous regions of Asia where they originate.

There are several popular Minnow species, but the most common found in home aquariums are:

You will find dozens of Minnow species across the world, but these two generally have the most interesting colors (in my opinion).

Minnows in general are a peaceful fish and are perfect for a community coldwater aquarium.

Just provide them with plenty of plants, rocks, and ornaments to keep them engaged, and you could lose hours watching them interact with their surroundings.

Minnows are not fussy eaters and will gobble up most commercial fish foods, though small crustaceans, larvae, and live insects make the perfect occasional treat.

Unless you’re a complete beginner (If you are, you’re in the right place) you will have more than likely seen, or at least heard of Platies.

They are one of the most common fish species in home aquariums across the globe and when you see some of their stunning colors, it’s not hard to see why.

Platies come in various different shapes, sizes and colors, but generally, their bodies are small (up to a few inches) with small fins and a larger tail that resembles a fan.

A common Platy species that falls slightly outside of the typical size and shape of Platy fish, is the Swordtail Platy, who tend to have a longer, thinner body.

The most common colors you will find on Platy fish are green, red, yellow, white and blue, but with breeders constantly cross-breeding different species, you can find some fascinating colors.

Though typically found in Freshwater aquariums, Platy fish can also thrive in coldwater tanks, as long as the water parameters are kept consistent. Plenty of water changes and a consistent temperature will keep your Platy fish happy.

Platy fish hail from river beds of slow moving rivers in South America, so an aquarium with a small amount of flow and lots of vegetation is ideal.

They are also peaceful fish who will leave harmoniously with Goldfish, barbs as well as other non-fish tank mates like shrimp and snails.

The mighty Pleco. A somewhat aggressive looking, unsightly fish with a heart of gold. These catfish species are perfect for coldwater aquariums for several reasons.

They are peaceful and will live happily with most other coldwater species, they are bottom feeders who won’t get in the way of your feeding of other fish, and they love to munch on algae, keeping your aquarium clean and tidy.

The most common Pleco found in home aquariums is the common pleco. They aren’t the most interesting fish in terms of their color, but what they lack in color, they make up in other ways, such as their unique scale patterns and interesting behaviors.

Plecos are a nocturnal fish, so you won’t see them much during the daytime. At night, you will find them sucking on the walls of your aquarium for scraps of algae as well as attached to plants and any wood they can find.

A large piece of driftwood not only maintains the ideal pH for Pleco fish, they also provide nutrition and a play-toy for Plecos.

As well as driftwood, I would recommend keeping plenty of plants for them to stay hidden away and safe during the daytime.

One thing to keep in mind with Plecos is the fact that they are omnivorous fish. They love algae, but that’s not enough to keep them healthy, they also need other plant matter such as vegetables and occasionally some live foods such as bloodworms, larvae and small crustaceans.

Plecos are the perfect addition to a coldwater tank, and a species that every aquarium owner should consider keeping. It’s worth noting that Plecos can grow up to 20+ inches in length, so a larger tank is always recommended.

I have written an article about my favourite Pleco, the Bristlenose Pleco here.

Another common freshwater fish that many people don’t know can be kept in coldwater aquariums is the shoaling fish, Zebra Danios.

These small, striped fish are typically found in tropical aquariums in large groups, but since they can endure a wide range of water parameters, they can also thrive in coldwater aquariums, as long as the water is kept consistent with good filtration and frequent water changes.

As previously stated, Zebra danios are a shoaling fish so they are best kept in groups of at least 5. They are small fish, so they take up little space, but they are incredibly active and love plenty of space to explore.

They can be boisterous little fish, but typically pose no risk to other tank inhabitants, making them ideal for community tanks.

The colors of Zebra danios tend to be silver and white with glistening gold streaks. They are fish that look more beautiful the closer you observe them.

Danios are an omnivorous fish who tend to stay near the surface, so a commercial fish food (either flake or pellet) will work for their main diet, with additional live and frozen foods thrown in as a treat every once in a while.

Has the Zebra Danio caught your eye? Check out our in-depth Care Guide for more information and pictures.

The Paradise Gourami fish is a fish with mixed opinions in the fishkeeping hobby. On one hand, this species of fish is incredibly beautiful to look at.

Their distinct orange, blue and red colorings make them one of the best looking fish in the world, but the biggest obstacle for most beginner fishkeepers is the fact that they are an aggressive fish.

They are boisterous, active and fascinating to watch, so if you are interested in keeping Paradise fish in your aquarium (or pond), then keeping them on their own is preferred.

If you can overlook their aggressive tendencies, Paradise fish are actually an easy fish to care for, and are perfect for beginners if kept alone. They like cool waters that are consistent, with good filtration.

They are omnivorous and will thrive on a basic fish flake or pellet. Breeding is also a breeze with Paradise fish (and other Gouramis) and the fry they produce are beautiful from the very beginning.

The Paradise fish is an excellent fish to add some color and vibrance to your aquarium. Place a few of them in a large, heavily planted aquarium and enjoy watching them play.

Just like the Platy fish, the Guppy needs no introduction. Since its arrival in the fishkeeping hobby in the 1860’s, the Guppy has become one of the most common, yet most highly acclaimed aquarium fish thanks to their easy care requirements and huge range of color profiles.

Since their introduction in the hobby, Guppies have been bred to display almost every color imaginable, from bright blue, to purple and yellow. The more unique the color, the more expensive they tend to be, and some of the colors are mind-blowing.

Guppies are a livebearing fish, meaning they give birth to live young. Breeding is relatively simple and most guppy keepers will attempt to breed them at some point.

In terms of tank setup, a heavily planted tank with plenty of Amazon Swords and Hornwort will be ideal.

Their temperament is calm and peaceful. You can safely keep Guppies with all other fish on this list. They are perfect for a community tank.

Being a popular fish, there are several commercial Guppy specific foods on the market in both flake and pellet form. They are also keen on shrimps, larvae, worms and small vegetables such as peas and cucumber. They aren’t fussy eaters!

Want to learn more about Guppies? We have an entire post dedicated to this fascinating fish here.

Another hugely popular fish species with a vast range of species are Barbs. Originating in small streams and rivers in Asia and West Africa, Barbs can be found in a variety of colors and sizes.

Barbs are known to be a bit nippy with other fish with flowing tails and fins such as Betta fish and Goldfish, but they are generally not considered an aggressive fish.

They are incredibly active and fun to watch zooming around your aquarium, flaunting their beautiful colors. You can read more about my favourite Barb (Tiger Barbs) on our website here.

Barbs can live in coldwater tanks comfortably, as long as the pH and hardiness (which both should be neutral) are kept consistent.

For food, they will eat the same foods as all of the other fishes on this list: a good-quality commercial food with the occasional worm and larvae as a treat.

What Do You Think?

So here are 7 of my favorite Coldwater fish (that aren’t goldfish). Which are your favorite?

I would love to hear from you in the comments below.